WARNING: This post contains minor spoilers to the show Friends, specifically the final 2 seasons. If you have lived under a rock and never watched this show, then I wouldn’t recommend reading! 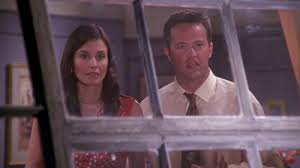 Danielle and I have always identified to the characters of Chandler and Monica. I am kind of a goof and would rather laugh awkward and uncomfortable situations than take them serious like Chandler, and my wife is very similar to Monica’s personality. Very ordered, clean and an amazing cook (not to forget to mention competitive!). Even our relationship is very similar similar to Chandler and Monica (I mean aside from the fact they slept together a whole season before getting serious, but that’s TV for you) in the way we are around each other. One thing we never thought we would relate to would be to this specific episode.

(Spoiler Alert) In the previous episode, Chandler and Monica got to a point in their journey “trying” with no success that they went ahead and did fertility tests, only to find out that Chandler’s swimmers were slow and Monica has a hostile uterus. OK, as we have said before, we have not gone into detail as far as whether we are able to conceive or not, and that is not important to us in this whole journey of adoption, but the question poses as “what do we do now?” The episode ends with them saying they will figure something out.

Jump to the next episode and in a very typical sitcom way they show how they deal with this rough situation and reality that they may never conceive children. They discuss surrogacy and a sperm donor (and the sperm donor portion is hilarious and awkward in a very typical Friends way) and at the end of the episode Monica decides that if she can’t get pregnant with Chandler’s baby, then she would rather not get pregnant at all. So what is their next option? Adoption!

We relate very well to this episode, although sperm donor and surrogacy was really never something we considered. Our almost immediate jump was adoption and we are so happy we are on board with this. I won’t got into detail as far as what happens next because you can watch the whole show on Netflix, and the way that the adoption of their children is handled is very beautiful in my opinion.

I often think it can be silly how television and the media can use satire and comedy in such a way to inspire us. We all need a good laugh and while the road to get to this point has been difficult, we are very thankful that this is where God has lead us as far as our plans as a family.

As a closing note, this episode contains one of my favorite lines ever and one I jokingly have been repeating to Danielle these past few days: “Shhh…if we are quite enough, we may be hearing the sound of a condom ripping”. So funny!

We are the Guerrero's! We live in New Mexico, love God and our cat, and are embarking on the journey of adoption!!